Ted was chosen from the Mace Budding Brunels project, whereas Mohamed was recruited from Fulham Enterprise Studio to replace another student who had dropped out. 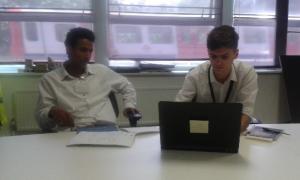 Over the course of the 5 days, Ted and Mohamed were introduced to various areas of the business and experienced some of the many aspects of a construction project. Monday kicked off with a Health & Safety briefing and a site tour. The rest of the week saw the two students meeting staff from all areas of the business, including Quality, Tower Cranes, Mechanical & Electrical, Project Management, Environmental Sustainability, Commerical, Community Engagement, 3D Modelling, Design Management, Logistics, Construction Management and Planning.

As well as attending meetings, Ted and Mohamed were tasked with working on a presentation to deliver together at the end of the placement to show what they had learnt during the week.

Feedback from Ted and Mohamed shows that they enjoyed and valued the placement. They worked very well together and this was evident during their presentation on the last day of the placement, where they delivered a presentation to a panel of Mace professionals; they were both very professional and displayed good presentation skills. Ted enjoyed the site tours and Mohamed particularly enjoyed working with the Construction Managers. His interest was Architecture but after this experience he would like to become a Construction Manager and is now hoping to enter into one of Mace’s apprenticeships schemes. 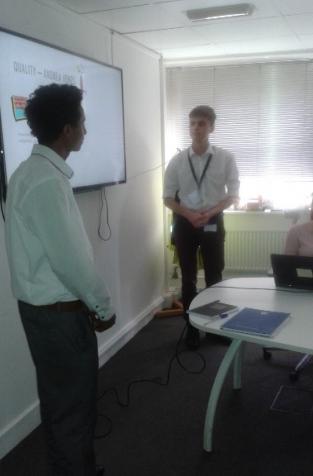 “Mohamed started his work experience placement a very shy, reserved young man. Having only recently moved to the UK from Eritrea, he is still practising and developing his English, however, this did not hold him back from making the most of his week with Mace. Mohamed began the week wanting to become an Architect and by the end of his placement he had changed his mind to Construction Manager. Prior to his work experience Mohamed did not understand what jobs piece together to make up a full Construction Project team. Having the opportunity to go out on site and see what a Construction Manager does on a day to day basis helped him realise he is a hands on type of person and does not want to sit behind a computer all day. Mohamed can now plan ahead and chose his college subjects accordingly. On the final day of work experience Mohamed and the other work experience student presented what they had learnt to a team of at least 25 Mace team members. Mohamed came across confident and put 100% into the presentation – this was a very nerve-wracking activity for Mohamed to undertake and he passed with flying colours. If his English continues to improve and he enrols on a theory based ‘Construction in the Built Environment’ BTEC course next year I have advised Mohamed to get in contact with me so I can discuss the Construction Manager Apprenticeship opportunities within Mace.” 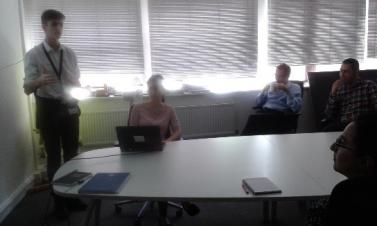 “Ted is a very mature, intelligent young man. Ted worked alongside another student whose first language is not English however, he showed great awareness and did everything he could to translate and ensure Mohamed understood what was being said / asked of them. He was very encouraging and thoughtful which is an extremely rare trait in such a young man. Ted began the week wanting to be an Architect and did not change his mind during the week. Insight into all the different job roles in the construction world confirmed his desire to go down the design career route. Ted was always well-presented and enthusiastic. Ted was asked to present his findings from the week to a team of at least 25 Mace team members. Ted came across confident and clear and was able to respond extremely well to questions put to him at the end of the presentation. After the presentation the Project Director at Mace commented ‘For a 17 year old, Ted’s verbal communication was far and beyond anyone he’s seen previously of that age. He will be an excellent Architect.’”

These successful placements really go to show the importance of providing young people with first-hand experience of the various roles in construction to provide them with a realistic perception of what these careers involve. As these placements show, they can help to either confirm a potential career choice or introduce them to something more suited which they may never have considered before.