What a night at the Inspire Awards!

Thank you to the Inspire Awards for making us their charity partner for the second year in a row and raising an amazing £1,200 for the Trust!

Over 300 housing and construction professionals gathered at the Hilton in Manchester for the Inspire Awards, celebrating diversity and inclusion in UK construction, engineering & housing.

Hosted by Mike Shaft, the event, which is now in its second year, honoured the companies and individuals that are at the forefront of driving change to build a strong and diverse workforce for the future.

Guest speaker Claire Lomas, who became paralysed from the chest down in a horse-riding accident in 2007, took to the stage to share her inspiring story.

In 2012 Claire hit the headlines when she walked the London Marathon in a pioneering robotic suit, taking 17 days and raising £210,000 for Spinal Research.  She was then invited to light the Paralympic cauldron in Trafalgar Square.

The following year Claire completed her next challenge handcycling 400 miles around parts of England and visiting many schools along the way giving inspirational talks, raising a further £85,000. 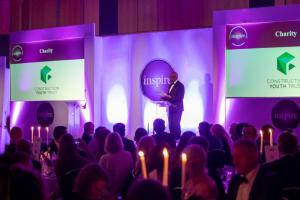 She has continued to fundraise, completing the Great North Run and Great South Run courses, and has so far raised over £600,000 for charity.

Hundreds of nominations were received for the awards, which comprised 16 categories, and the independent panel of judges, made up of construction professionals including our Chief Executive Carol Lynch, had their work cut out for them choosing the winners.

Winners of The Inspire Awards 2019:

The Inspire Awards were sponsored by British Board of Agrément, easy-trim, Procure Plus and Redrow.