Tyrone shone so much on his practical project, he was offered a job on the spot!

When Tyrone joined us on our Investing in Rehabilitation programme he was 17 and feeling unsure of his next steps.

He found a traditional classroom learning environment challenging, as he struggles to concentrate for long periods of time which has led to him becoming easily frustrated.

During the construction project, Tyrone proved himself to be a highly motivated individual when presented with practical tasks. A diligent young man with an incredible work ethic, Tyrone impressed one of our industry volunteers from employer Highview so much that he was offered a job on the spot!

“This project seems to have had a really positive impact on Tyrone and it has increased the confidence he has in his own ability and also shown that he can achieve his goals. I was made aware that he was offered a conditional job offer during the course which has boosted his self-esteem massively.” – Tyrone’s support worker 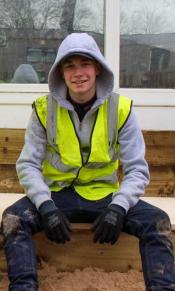 Giving Tyrone the opportunity to interact with the volunteer from Highview allowed him to showcase his skills to an employer. Based on his performance during the project, Highview decided that they wouldn’t need to see Tyrone’s CV, rather as soon as Tyrone passes his CSCS card test they’ll have a job for him onsite!

Tyrone is currently undertaking his CSCS card training and as soon as he passes he’ll be joining the ranks of Highview!