Two months in and our Taylor Wimpey bricklaying apprentices are absolutely loving it!

It’s been two months since our Ebbsfleet lads began their bricklaying apprenticeships with Taylor Wimpey and they’ve all been having a great time getting stuck in.

The apprentices are based on Taylor Wimpey’s Royal Parade development on the former Howe Barracks site. Every cohort of bricklaying apprentices build their own apprenticeship school onsite and when the space is needed for the development, they take it down again to rebuild elsewhere! 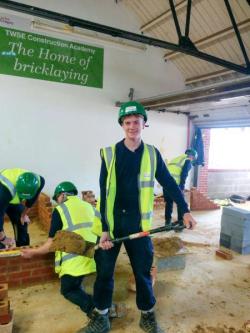 So far the apprentices have been busy renovating their school, smashing down walls to join three former rooms into one massive classroom. The apprentices spend around 6 months developing their basic practical skills before being transferred to work on the main site. Eventually, five hundred and thirteen new homes will make up the Royal Parade development.

This September saw Taylor Wimpey take on their largest cohort of bricklaying apprentices to date. The forty three apprentices are from a diverse range of backgrounds, with the majority being local to the area. Taylor Wimpey want to level the playing field for young people entering industry careers and their next intake of apprentices will focus on carpentry, site management and painting and decorating positions.

We’re absolutely delighted that our young men are enjoying their apprenticeships so thoroughly. When Donna, Senior Programme Manager for North Kent, went to visit the apprentices onsite she was blown away by the hardworking atmosphere that was still imbued with a sense of fun and camaraderie. One of our apprentices had a serious jolt to the system getting used to his five am wake ups, but he’s getting used to the long days and finds the new practical way of learning really invigorating.

"It's hard work, but it doesn't matter because I'm working and earning money!"

"My expectation was that I'd be used as a labourer, but that's not it at all" 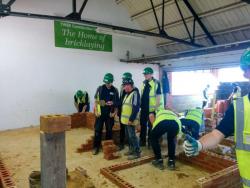 Another of our apprentices excitedly relayed the day when they were practising their bricklaying skills in their outside bays and it began to rain. The solution? The carpentry apprentices were immediately drafted in to build roofs over the bays.

The opportunity to begin an onsite apprenticeship at sixteen has been invaluable to these young men. We’re looking forward to continuing our work with Taylor Wimpey to bring more of these opportunities to our young people.