Getting to closer to construction with Pimlico Academy.

We spent 2 days with 8 construction students from Pimlico Academy, taking them on an in-depth exploration of construction careers to get them inspired for their Year 11 studies.

The 2 day programme was a whirlwind of activity, with the students beginning in the classroom but ending up fully immersed in the construction and built environment sector by the final afternoon. The aim of the programme was to inspire and excite the students about their career and post 16 options to enable them to focus over the course of their Year 11 studies and GCSE’s.

Beginning in the classroom we were supported by 4 current apprentices from Interserve for a KS3 Maths Quantity Surveyor session. The session takes classroom maths learning and transfers it into everyday practical use on a construction site, bringing the learning alive and helping the students recognise the importance of what they are learning. 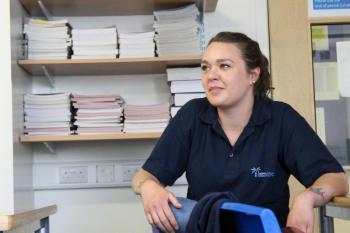 After working alongside the apprentices in the maths session, the students then had the opportunity to sit down and discuss how the 4 apprentices had found themselves in their current positions. The students were surprised to hear from a Quantity Surveying apprentice who had taken the traditional academic route until deciding upon a degree apprentice. The apprentice felt that they would get a head-start on their peers at university who wouldn’t haven’t the hands-on experience, but would have the debt. The students commented on how they had previously thought apprenticeships were for those who couldn’t go to university.

Another of the apprentices was only 17 and had chosen to pursue an Electrical apprenticeship after he realised that staying in 6th form to study for A-Levels wasn’t the best option for him and would ultimately hinder his ability to achieve his full potential. He explained to the students how once he’d realised he didn’t necessarily have to stay in school following his GSCE’s, he found a new vigour for school as it had become his gateway to moving onto something ‘more exciting’. The third apprentice had come to a Building Services Design apprenticeship after she had become disillusioned with her first career path. She wanted something more challenging, that was different every day and ultimately could lead to a very successful career. The construction industry was able to supply her with everything she wanted. 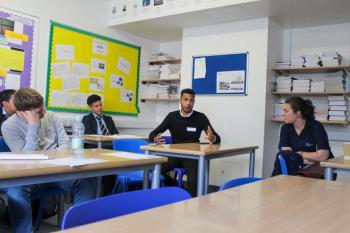 The fourth apprentice had arrived at their Building Services Design apprenticeship after the abrupt end of a long held dream career. The young apprentice had been a top athlete, preparing to compete at the Rio Olympics. However, a hard kick to the back during a fight put an end to his fighting career and he suddenly faced a vast, open future with no idea what he wanted to do. The apprentice shared how he’d spent his whole school career believing he didn’t need to care about anything but training, but after his accident he was shocked with how his options had closed down and armed with a CV detailing only athletic success he felt very lost. Needing a challenging career that was active and varied, but also with an accessible entry level for him, the apprentice found himself looking at careers in the construction and built environment sector. It was extremely inspiring to hear the apprentice describe how he’d been able to gain an apprenticeship with Interserve based on his ability to highlight transferable skills from his time as an athlete and how Interserve had seen his determination and dedication as a symbol of his potential, giving him an opportunity to begin a new career with them.

Construction Youth Trust ran an amazing, inspirational programme for our students.  They explored practically applying maths to real life, something they would not normally do, met four very different and relatable apprentices, visited a live site to understand the theory of construction as well as undertaking a practical design and build task. The programme opened up our students’ eyes to the careers they could have in the construction and built environment. The whole experience was brilliant and exactly the type of support I have been asking for, for years. Luke Collins, teacher at Pimlico Academy.

All 4 of the apprentices went to great lengths to stress to the students the importance of ensuring they do something extracurricular to show them in their best light. Whether this them being part of a football team, or helping a younger sibling learn to swim. The best way to succeed in the construction and built environment industry is to show your ability to work as part of a team and that you’re not afraid to work hard to achieve top results.

After hearing about the varied roles of the apprentices, the students then visited Mace’s Grosvenor Square site to see the careers in action. Over the second day the students undertook a design and build project based upon a brief. The students had previously been part of a group that designed the new Tranquillity Garden at Multiplex’s Chelsea Barracks site which had centred on the need to ensure building projects are sustainable and it was really wonderful to see the students put sustainability at the fore of their work.

For those participants interested in pursuing a career in construction our RBKC hub leads, Pearl and Kaitlyn, will work them one-to-one over their year 11 studies as part of our Building Bridges to Careers programme. The programme offers tailored support to help young people achieve a successful and appropriate post-16 outcome.