Andy Wates, Peter Murray and Sadie Morgan to cycle from London to Birmingham

You may have seen the youngest female crane operator in the UK gracing the pages of The Sun newspaper a few weeks ago. This inspiring article was part of a wider campaign to promote diversity and encourage young people to pursue a career in the construction industry, which will present 250,000 new job opportunities in the next 5 years.

Construction Youth Trust has joined forces with UK Construction Week to realise a series of initiatives to raise awareness about exciting career prospects, boost the industry’s reputation and promote diversity. The atmosphere surrounding the cooperation is electric and positively contagious. So much so that businessmen are taking on sporting challenges to promote the cause. 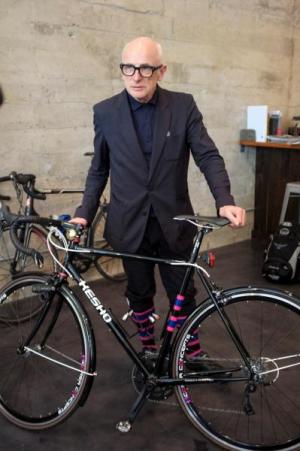 It is the case of Peter Murray, chairman of New London Architecture (NLA) who is personally taking part in the UK Construction Week Cycling Challenge. On the 17 October, Peter, accompanied by Wates’ Group’s Director Andy Wates and dRMM Architects’ Director; and HS2 Design Panel Chair Sadie Morgan; will be cycling 125.7 miles from London to Birmingham to fundraise for Construction Youth Trust.

The two-day challenge will finish at the NEC on the 19th October when the group is expected to arrive by 9.30am during UK Construction Week, which means they will have to start at four o’clock in the morning! Peter takes the relationship between cycling and construction very seriously: in addition to chairing the NLW, he is a member of the Construction Industry Cycling Commission, which is working to improve construction's disheartening record of deaths and serious injury of cyclists and pedestrians: “Construction HGVs are disproportionately responsible for cyclists’ deaths”, says Peter.

This is one more reason to make UK Construction Week Cycling Challenge a success as a total of 10 cyclists are taking part, aiming to raise 9k to support the Duke of Gloucester’s Young Achievers’ Scheme: an annual decoration opportunity offered by Construction Youth Trust to exceptional young professionals in the construction industry to commend and celebrate their achievements.

Media 10, organisers of the UK Construction Week, talked to Peter about his vision and hopes:

Media 10: Would you tell us more about the cause, the work of Construction Youth Trust (CYT) and how does it relate to you?

PT: On the one hand, anyone in the construction world is aware of the lack of skills in the industry, on the other there are lots of young people in need of jobs and a rewarding career. The CYT brings the two together. It’s a win/win situation. Construction is a wonderful career and plays such an important role in our quality of life and the nation’s economy and the CYT does a great job in introducing young people to its benefits.

Media 10: Why cycling from London to Birmingham?

PT: I wanted to cycle to Birmingham because it’s much more fun than taking the train; cycling keeps me fit and healthy and there are lots of nice places and beautiful countryside on the way. I’m trying to work out a route that follows the plans for HS2, which I think is an exciting project for London and for the UK.

Media 10: Why this particular form of fundraising?

PT: Lots and lots of people run, jump out of planes and cycle for charity. We all get regular requests from Just Giving sites. But people keep on giving to good causes. I am continually astonished at the generosity of friends and business contacts. It makes the pain seem worthwhile.

Media 10: How are you preparing for the cycling?

PT: Each weekend I increase my training distance by 10 miles, so I hope I’ll be ready by October. I’m quite a bit older than the other riders, so I hope they won’t go too fast! My daily commute, together with cycling to meetings, is around 20 miles, so that helps too.

Media 10: What has been or do you anticipate being the biggest challenge?

PT: Keeping up with Sadie Morgan - who is design champion for HS2 and a member of the Government’s Infrastructure Commission, but is also a very proficient rower as well as cyclist. Rowers tend to have very strong legs!

Media 10: What are you most looking forward to at the end of the challenge?

PT: Collecting loads of money from all the exhibitors and visitors to UKCW and handing it over to CYT. I generally like a pint of Guinness at the end of a ride, it’s very good for repairing aching muscles I always say.

Media 10: And finally, what did you want to be growing up?

PT: I wanted to be an architect when I was 8 but started writing when I was a teenager and babbled with the idea of becoming a journalist. I trained as an architect but have ended up spending most of my career writing about architecture rather than doing it. So I have been lucky enough to merge my two passions.